The following is a guest essay by former student Thaddeus Tague.

“What you write will never be more important than how you write it." — Andrew Pudewa, Institute for Excellence in Writing

The apparent disconnect between these two essential questions—"what" versus "how"—is nowhere more prevalent than the largest space for communication and interaction today: social media. Pudewa, of course, was not pitting the questions against each other in a deontological cage match; he was referring to primacy.

Western society has taught academics and students of communication that we should (and do) accept ideas based on their merit alone. While this is true, it is a rather simplistic over-generalization of how the human psyche actually processes ideas, biases, and presuppositions in conversation.

Albert Mehrabian, Professor of Psychology Emeritus at UCLA, conducted a crucial series of studies in the 1970s on verbal and nonverbal messages. His findings were eventually published in a book titled Silent Messages.

Mehrabian’s studies found that test subjects were more convinced by a speaker’s attitude and tone than by their words. He explains, “The non-verbal elements are particularly important for communicating feelings and attitude, especially when they are in-congruent: if words and body language disagree, one tends to believe the body language.”

Within personal communication, he concludes, humans prioritize vocal cues and body language 38 and 55 percent of the time respectively.  The human brain uses cues from the face and tone of voice to give words their complete meaning.

Furthermore, at a 93 to 7 split, the human brain tends to receive information and formulate opinions based on how the person said what they said, not what they said. 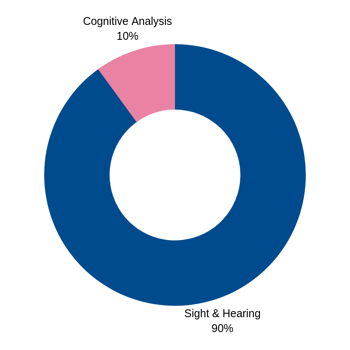 At a 9 to 1 ratio, the brain prioritizes what it sees and hears over the cognitive analysis of the words used. Thus the infamous 7/38/55 rule was born, unveiling a crucial communicative hierarchy.

What happens when we apply this principle to the social media landscape, where there is a veritable vacuum of non-verbals? Your brain will do whatever it needs to help you complete the picture and interpret the dialogue.

The principles explained above create an interesting interaction in our modern society, a society that dialogues mainly through social media (a screen) and is unable to see or hear non-verbals. More to the point, how has dialogue through a screen killed productive discourse, increasing social toxicity and tribalism? And why doesn’t the same breakdown happen with books?

The human brain is built to decipher other people’s intent and viewpoints, even as conversations are in progress. What is the other person thinking? What do they intend towards me? All of these questions are more easily answered in face-to-face interaction. Everything required to answer those questions is right out in the open, embodied. By this same principle, Online interaction is inherently easier because it requires less emotional and cognitive effort than face-to-face communication. This is often why people gravitate towards Online communication, even though they may be unaware they are doing so.
Especially when humans read the arguments of those they consider intellectual, the brain infers non-verbals cues at every given opportunity.

A joint study from Princeton and University of Pittsburgh showed our time spent reading on computers activates the same areas in the brain in charge of making inferences about other human minds.

Suppose someone you love angrily looks at you and yells, “I love you!” It gives you pause. Did they mean it? What are they feeling? Now suppose a loved one approaches you and places a hand your shoulder, saying, “I just want to let you know that I am struggling with feeling a bit frustrated with you, but I love you.” Now you receive an affirming message. Both communicate the words “I love you,” however one does so much more effectively than the other does.

The September 26, 1960 presidential debate between Richard Nixon and John F. Kennedy is a classic example. It was the first-ever televised presidential debate. Kennedy, wore a lighter suit, was younger, and handsome. Nixon looked haggard and sick that day. After a poll, experts found most radio listeners thought Nixon had won, while the majority of television watchers thought Kennedy had won.

Romans 12:17 speaks to this principal, saying “Do not repay anyone evil for evil. Be careful to do what is right in the eyes of everyone.” (NIV) The NASB Lexicon gives a more intense translation: “Respect what is right in the sight of all men.” Clearly, Paul recognizes that perception has an abnormal effect on the witness of a Christian.
It is important to recognize the large role all non-verbal cues play in effective communication. They have the power to determine single-handedly the success or failure of verbal message-reception.

While this communicative disconnect phenomenon is isolated and expanded on Facebook, is not unique to that platform. Online chat forums, discussion forums, exhibit this too.

But what exactly is happening that is so debilitating?

People respond to argumentation by committing a variety of logical fallacies that can potentially derail an otherwise healthy conversation. Just because the brain is making inferences does not mean they are correct. Most commonly, participators commit the straw man fallacy, false equivocation, red herring, and ad hominem, among others. But why does this happen?

Our brains happen to follow a very strict bias toward negativity. This bias protects humans from threats and endeavors to keep realistic expectations of what happens in a fallen world. This inclination is well studied and documented by many fields. Given the nature and volume of inference that must take place in order to complete the “missing pieces” of Online dialogue, the brain negatively infers the motivations and drivers of the people on the other side of the screen, particularly if they are writing something that directly opposes their beliefs.

A misinterpreted statement is met with a scathing comment, which in turn breeds a defensive and scathing reply. Once a full-blown disregard for honorable interlocution sets in, it is hard to reverse the toxicity.

Denizens of social media flock to circle the wagons, defend their ideology, and tend to the wounded. Groupthink and a descent into straw-manning and ad hominem argument set in. This is a key element of modern political tribalism. People plug their ears, and whether they write out blind responses or detailed and organized ones, the effect is the same.
It is important to note here these negative influences usually only affect discussions that involve conflict or disagreement. However, this is not a reason to despair. The good news is, normal and empathetic conversations can and do take place on the Internet daily. Successful social discourse and free speech are predicated on prudent, wise citizens using our communicative freedom both skillfully and judiciously. Unfortunately, the primary mode of verbal interaction today breeds toxicity and tribalism.

Lastly, if this tirade of anti-screen dialogue is correct, why don’t the same host of negative impacts follow social discourse through journals or paper and ink?

There are several reasons. People generally read books to entertain or educate themselves. Put flatly, few people read books they know they will not enjoy or even thoroughly disagree with. Reading intonates an investment in understanding. The reader endeavors to empathize with and learn from the author. Even if the reader doesn’t agree with the foregone conclusion, by the end of the book, they can list a few positives of what the author wrote. Conversely, social media throws real-time, unfiltered public discourse in the faces of viewers, often triggering negative responses, defense mechanisms, and so on. Social media messaging is often devoid of this level of analysis and empathy.
Stealing Francis Schaeffer's famous question, how shall we then live?

Well, whenever possible, carry out a disagreeable conversation in person, not over text or Facebook. Refrain from using social media as a way to “reach” people or “fight” for your side of the aisle—it is useless and only contributes to tribalism. Even if you win, the other likely has not truly listened. The fields of justice and political ideation will not be won or lost on social media—it will be won or lost in the hearts and minds of people.

Thaddeus Tague is the Head Coach at Ethos Debate where he has taught high school and collegiate forensics for over six years. He graduated from Liberty University in 2018 with a B.A. in Public Administration.

If you enjoyed this article, we've got lots more like it in Founders Magazine, a publication of Patrick Henry College.