I Almost Didn’t Graduate: A Story of God’s Faithfulness to Provide 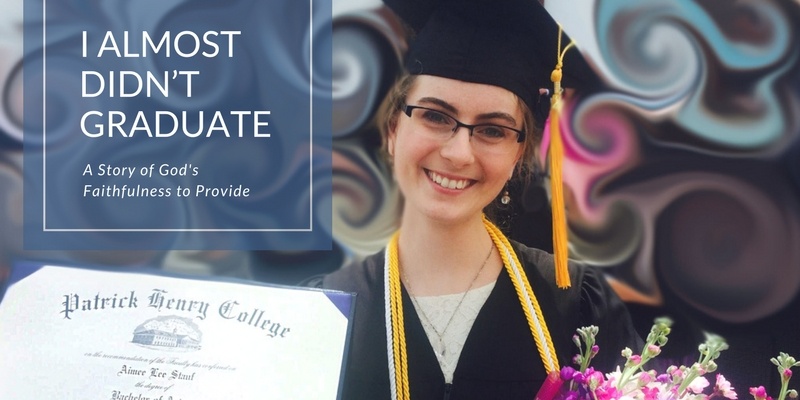 Most of you know me as Aimee Stauf, PHC admissions counselor. You may know that I was born and raised in Southern California, near Los Angeles, and that I came to PHC five and a half years ago in 2011 and graduated in 2015 with a Journalism degree. But what most of you don’t know is that I almost didn’t graduate from PHC many times over. My parents have had a rocky financial situation for many years—my dad was laid off from his lucrative engineering job in 2010 as part of the cuts to military spending. For my entire senior year of high school, my family was living on unemployment and a two-month stint at a contracting job.

God's calling and the right fit

It was in this craziness that I decided to attend college. I was planning to attend college from home and graduate with no debt in less time, but I realized that I wanted a college education that would train me not only for a job, but for a lifetime of serving God and working for His glory. I started looking at Christian schools, scheduled and paid for my own SAT exam, and submitted applications for the late deadlines at all of the schools I considered.

PHC was the only place that I saw with a Christ-centered student body, high-caliber academics, and a tight-knit community. I knew it was the right fit for me.

The impossible: Affording PHC with no family support

Yet, the question of finances always lingered in the back of my mind. Would I get scholarships? How was I going to pay for college? My dad was unemployed at the time and I saw no way to attend my freshman year. Just a month before coming on campus, my dad received a contracting job and we scraped enough together for my first semester. I got an on-campus job and paid for all of my own expenses, including plane tickets home for Christmas. There was never any guarantee that I could return the following semester, and when my dad lost his job in November I had a very difficult choice to make.

I had always felt called to Patrick Henry and felt the same call that Christmas, so I decided to act in faith and bought a round-trip ticket. That Christmas was the saddest Christmas I have ever experienced—we could barely afford groceries and my family was torn apart by the stress of having no money. I spent almost the entire month in prayer and reading through every promise of God’s provision I could find. I reminded God of his promises and pleaded with him to provide for me to attend PHC. I was diligent to seek and knock; I prayed for finances like Elijah prayed for rain.

God answers prayer, but not in the way I like

The deadline for semester bills was January 5, and when the day ended, reality began to settle into my soul. God did not want me to attend PHC. I had gotten his call wrong, because he hadn’t provided the way. ‘Where God guides, God provides’ may be a Christianese promise not found in Scripture, but I had certainly believed it. Disappointment quickly gave way to bitterness and anger. I was angry that God had not provided for what I had so clearly discerned was his will.

Two days later was a Sunday, and that morning in my devotions I read Psalm 116, which proclaims the goodness of God because he answers prayer. The first two verses hit me like a punch to the gut:

I love the Lord, because he has heard
my voice and my pleas for mercy.
Because he inclined his ear to me,
therefore I will call on him as long as I live.

The Lord had not answered my prayers, or at least had not answered them in the way that I wanted. I was angry at God and went to church in a huff, and stood silent with folded arms in the third row. The final song of the set was “Blessed be your Name” by Matt Redman and my eyes welled up with tears as I plucked up the courage to sing, “You give and take away, my heart will say, blessed be your Name.”

In that moment, God provided for me. He gave me Faith, which is a far more precious commodity than wealth. No matter what, I knew that God would care for me, his daughter, and make me more like Christ. If staying home from college for a semester would bring him more glory, I could accept that and still trust his goodness.

The impossible (again): returning to PHC

The next morning, I woke up to a phone call from Dean Sandra Corbitt, the Dean of Student Life at PHC. “I have exciting news for you,” she said. “First I have a question: how would you like to return to Patrick Henry this semester?” I hurriedly mumbled something about finances, and she continued. “An anonymous donor has paid for the rest of your semester’s bill. Congratulations, you can come back to PHC!” I was beyond elated. Twenty-four hours later I was buckled into a trans-continental flight from L.A. to Washington Dulles for the Spring semester.

That was only the beginning of the story. Each semester after that was always a question of finances. Some semesters my dad had some contract work and we scraped together the funding. A few of those semesters I decided to take out minimal student loans. Other semesters I made enough from student jobs to pay for the balance on my account. My grandmother provided some funding, as did a member of my church—to the tune of $3,000, which is exactly the amount I had prayed for.

In each of these scenarios, I learned to trust God even more. His timing is perfect and his faithfulness unending.

Now, I don’t tell this story in order to encourage you to twist God’s arm. I don’t even tell the story to say that God will provide finances in your circumstance. I tell this story to encourage you, that God always draws us closer to himself. He is always good. And even if he provides in ways that you didn’t expect, the ultimate goal is knowing Christ and making him known, no matter what your circumstances.