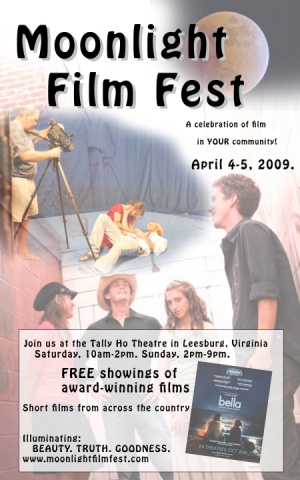 When Patrick Henry College alumna Sarah Pride (Literature, '07) landed in the hospital with a sprained ankle from a jiu-jitsu accident, she had started preparations for a film festival in the Leesburg, VA area. As classmates wheeled her into the E.R. in an office chair, she mused, “I guess I’ll have the time to organize that festival.”

“It has been a wild, life-changing trip, stepping out into the unknown, but I think this is where my Lord wants me right now,” she said.

Leesburg will host the unique event, the Moonlight Film Fest, on April 4-5. The festival, to be held at the Tally Ho Theatre, will feature films that shed light in the darkness of the human soul and feature truth, beauty, and goodness. These include free showings of Fireproof, Bella, and Academy Award nomineeMost: The Bridge, along with handpicked short films from across the nation.

“I am planting a seed in the independent film community, and I am eager to see what my Lord does with it,” said Pride.

After much prayer and debating back and forth between business or non-profit models, Pride decided to present the Moonlight Film Fest as a gift to the community. Her brother surprised her with a check that covered the cost of the venue, and she is scrimping to meet the other costs of hosting the festival.

"It is a great learning experience--much cheaper than film school," she explains.

Pride spent the year since her May, 2007 graduation working in PHC's Department of Communications as a web administrator and news writer, learning hand-on filmmaking in her off-hours, and attending every film festival she could find in Virginia. She realized that, while Christians often talk about the evils of Hollywood, not many are trying to build a realistic alternative. The Moonlight Film Fest, she says, is a tiny step toward that goal. The purpose of the festival is two-fold: to help foster a vision for independent Christian film and to provide a venue for it to play. The date is set, the venue is reserved, and film showings are coming together.

“I am accepting any genre of film [until March 20], so long as it is an excellent story that is reaching for goodness, beauty, and truth,” she said. The entry form is on the festival website. 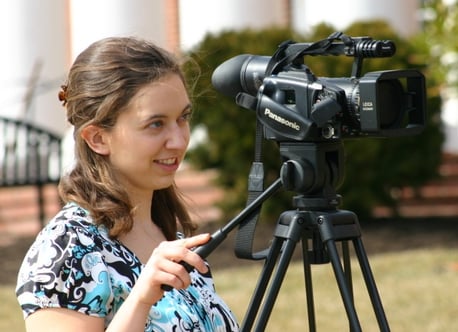 Pride grew up with two loves: writing stories and watching film, from Aliens to It’s a Wonderful Life. She took a screenwriting class as a freshman, but had always planned to attend grad school for history, “something nice, safe, and respectable,” she recalls.

Then, a professor's question her senior year made her realize that teaching history classes wasn’t really what she wanted to do with her life.

“I decided that I was going to ‘invest talents’ in independent filmmaking over the next two to three years after college and find out if I had any skills in that arena."

In the process, she says God blessed her with amazing contacts. In summer of 2007, George Escobar of Advent Film Group let her observe on the set of Come What May, which gave her the courage to embark on her own short films. And at the Redemptive Film Festival at Virginia Beach, after praying for specific leading in whom to approach, she met Gregory Grigoire, chief of staff for the Jesus Film Project, who in turn put her in contact with West Coaster Clyde Taber, organizer of the Damah Film Festival. Taber put her in touch with Nathan Elliott of the Doorpost Film project and John Ware of the 168 Film Project.

"People typically expect a lower standard from Christian film, but that is because they don't know where to look," said Pride. "I've been spending the last several months watching some quality short film."

Pride says that with available digital technology and interest of young people in film, “ideas have the opportunity to make a powerful impact.”

“If Jesus Christ really is the answer to all the universe’s problems, then Christians should be creating the best art. I set out to see if we could meet that challenge,” she said.

Pride has started Moonlight Media, LLC to serve both as the legal mechanism for the festival and as the vehicle for future independent film productions of her own. She and a small collection of artists, both at PHC and in the surrounding northern Virginia area, aim to make projects of increasing difficulty, with the eventual goal of completing a feature film. Their first short film reached the top 25 at the spring 2008 Reel Dreams Film Festival at Regent University in Virginia Beach.

Visit the festival website for more information about entering or attending. The Moonlight Film Fest will run from 10am-2pm on Saturday, April 4 and 2pm-9pm on Sunday, April 5. 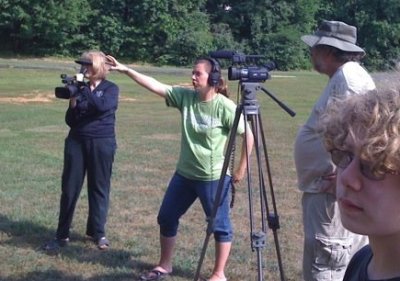 Arriving at work each day at Patrick Henry College, Literature alumna Sarah Pride (’07) usually sports a laptop bag with a MacBook Pro and an external hard drive. It isn’t necessarily required equipment for her job as PHC’s web content manager and editorial assistant, but she occasionally needs them to address urgent video editing needs that arise.

In the past year, she has used the portable Final Cut Pro editing suite to produce a complete commemorative DVD of the fall Barbara Hodel Center dedication ceremony, as well as multiple videos for PHC’s website. She has also twice travelled to Mexico in recent months to chronicle on film the work of ministries in that country. And it is with some breathless wonder that she notes that next weekend (June 11-12) will mark the second year of her Moonlight Film Fest (MFF), an independent Christian film festival she has organized to showcase “the creation of excellent films that communicate beauty, goodness, and truth.” Sessions of the festival will be held both at PHC and at the Tally Ho Theatre in Leesburg. 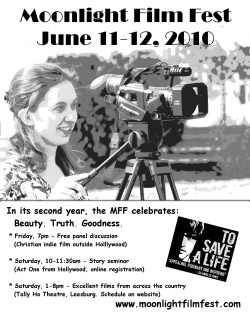 As a freshman, Pride took a screenwriting course taught at PHC by a faculty member from Act One from Hollywood, an organization that trains aspiring Christian writers to make an impact in the mainstream entertainment industry. This spring, seven years later, Pride contacted Act One to arrange a screenwriting seminar for her film festival and was elated to learn that Jack Gilbert, the same professor who taught her freshman course, would oversee the session. His two-hour story seminar on the morning of Saturday, June 12 from 9:30-11:30am in Nash Auditorium will introduce attendees to the art of writing scripts that work. Interested participants can register online for $30.

“Story is the center of film,” Pride explains. “Nobody in the Christian world teaches story more effectively than Act One.”

Three years ago, Pride had not touched a movie camera. But a series of events, including a change from a History to a Literature major prior to graduation and involvement with PHC’s student-led theatrical group Eden Troupe, began to redirect her love for the arts toward film.

“Thanks to PHC’s wide core curriculum, I knew how to attack a new discipline. And even more thanks to PHC, the College employed me,” grins Pride, whose work as the College’s webmaster and editorial assistant since 2007 has also allowed her to explore her passion for film.

In the process, she also credits a mentoring relationship with Advent Film Group founder George Escobar, who produced the movie Come What May on the PHC campus in the summer of 2007. 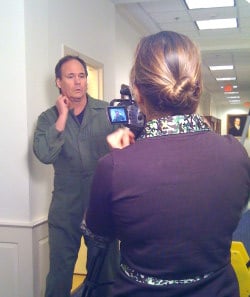 “Film is such a difficult art form, involving everything from business savvy to people skills to technical ability to artistic talent of many different kinds,” Pride says. “Escobar’s kindness allowed me to catch the vision and see that even a ragtag collection of diverse talents can make film work.”

The idea for her own MFF grew slowly as Pride took stock of the condition of the Christian film industry and started an M.F.A. in Script & Screenwriting via distance learning from Regent University.

“I had big dreams for my stories, but a long road to go to bring them from page to screen,” she notes. “I have to learn my craft, and I have to meet others who are reaching for the same goals. Most of us Christian filmmakers are near the beginning right now. Why not grow together?”

This year’s Moonlight Film Fest features a Friday night panel discussion with John Ware (Founder and President of the successful 168 Film Project on the West Coast), Eric Highland (networker and founder of Christian-movie.com), and representatives from In Jesus' Name Productions and Regent University. Pride will webcast this panel, using the same technology PHC recently implemented for its Commencement webcast. On Saturday afternoon, she is showing short films from across the country at the Tally Ho Theatre in Leesburg.

“Looking back, I see how God has been training me for years to be able to do this,” notes Pride soberly. “God uses the weak things of this world to shame the strong. I am a weak thing.”

Find a schedule of events for June 11-12 and get involved on the Moonlight Film Fest website.

Click on the embedded video below to view an illustration of "Goodness" produced by Moonlight Media, LLC, Pride's production company, and scored by former PHC student Benjamin Fan.