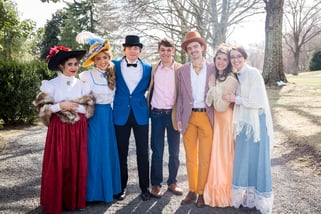 As PHC’s drama program, Eden Troupe strives to present thought-provoking and amusing plays for the glory of Christ. Eden Troupe performs productions every semester for fellow students along with the local community and directs productions according to the club’s goal of portraying truth and beauty through the classical art of theatre. Eden Troupe selects plays and musicals according to their entertainment and instructive value. The group produces one or more theatrical productions each semester, which have included:

Every production has a message, and Eden Troupe strives to perform plays that keep the audience laughing, gripping their playbooks, or musing over a deeper meaning. Eden Troupe seeks to entertain through humor, irony, facial expressions and comedy.

PHC’s oldest club, Eden Troupe has been a completely student-led organization with Dr. Cory Grewell as its faculty sponsor. Eden Troupe has always been dependent on the faithful support of its student body and audience.

For more information or to join, contact the club board through the form below.