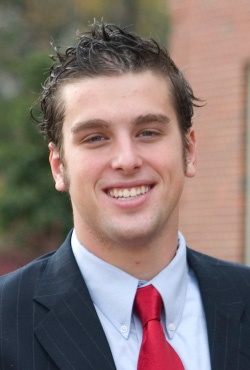 In the video (see below), Martin calmly introduces himself with the words “Mr. President, my name is Nathan Martin.  I actually help produce a conservative talk radio show, and I’m getting married in two weeks.” He then frames a nuanced yet pointed question, asking the President about the federal government’s inconsistent responses of late toward Arizona's attempt to protect its border from illegal immigration and drug trafficking and California's efforts to legalize marijuana.

Why, he firmly asked Mr. Obama, are Arizona and other southern border states prohibited from enacting their own laws against illegal immigration -- the rationale being that these laws cross federal jurisdiction -- while California is allowed to legalize marijuana in spite of contradictory federal law. The President responded with a somewhat vague defense of his administration’s illegal immigration policy but did not directly address Martin’s question.

“I hoped he would square the two positions, reconcile them,” Martin wrote in his re-cap on National Review On-line. “Unfortunately, like we got throughout the town hall, all we got was rhetoric.”

Observed PHC founder and Chancellor Dr. Michael Farris: “Nathan studied constitutional law at PHC, and his question reveals a very sound understanding of constitutional principles. Unfortunately, the President failed to address Nathan's direct concerns. It was, nonetheless, yet another excellent example of PHC students -- past and present --continuing to engage the culture in unique and unexpected ways.”

In the National Review Online article, Martin, an associate producer for Bill Bennett’s “Morning in America,” discusses the steps he took, first to apply, then interview for, then find himself sitting in a crowded studio audience for MTVS nationwide broadcast. In the piece, entitled, “I Was a Right-Wing Obama Town-Hall Crasher,” he observes that he is hardly the typical Obama town hall audience member:

“Let’s review the facts. I’m a white conservative male from Mississippi. I own a gun. I voted for John McCain. And each morning from 6 to 9 a.m., I help produce a nationally syndicated radio show hosted by Bill Bennett and Rick Santorum. I don’t think MTV casting agents dream about finding the likes of me.”

Reflecting on the experience a day later, Martin shared how his radio boss, Bill Bennett, “encourages us to foster a spirit of ‘candor, intelligence and good-will towards all.’ I would hope that PHC graduates would take that admonition to heart. We as Christians can be leaders, not just in ideas, but in how we communicate those ideas to the world. Salt, light and grace.” Former PHC journalism graduate Chris Beach (Journalism, 2010) is also a producer for Bennett's "Morning in America."

Martin’s fellow workers at Salem Communications, the national Christian broadcasting corporation that hosts Bennett’s Morning in America and other national conservative talk shows, circulated news of his appearance across their network.

“Martin—who joined the D.C. staff of SRN’s MORNING IN AMERICA in 2009—calls Obama “as an individual a gracious, impressive guy” but adds “I do wish he weren’t our President,” the Salem release noted. “Nevertheless, a real thrill for a rising member the next generation of conservative broadcasters in America….who we are proud to note was firm but respectful & polite addressing President Obama  (reflecting extremely well on the program he helps produce, Bill Bennett’s MORNING IN AMERICA.)

Recalling his moment in the limelight, Martin says he is satisfied that a young conservative was even chosen to participate, much less ask a question of the President, and he is thankful that both parties upheld principles of honest discourse, charity and respect.

“And at the end, that’s all I wanted,” he said, “a chance to question the President face to face— to quit reading commentary for a few hours, to try and get a straight answer, and yet still be civil about things. In the end, that’s part of what happened.”

A Conversation with President Obama on MTV