As a child, Jeremiah Lorrig (Government, ’07) listened to Adventures in Odyssey, as well as to dramatized theater programs. These programs redid movies from the 1930’s and 40’s by having the original actors do an audio drama production. Lorrig loved listening to the programs and would let his mind travel to imaginary worlds, meet curious people, and partake in daring adventures.

Now as the External Relations officer at Generation Joshua, Lorrig has found himself the producer of a project that brings back memories of his audio drama days: Iliad House.

As part of his work with Generation Joshua, Lorrig created an audio drama training program to use at conferences across the country. It was designed to teach kids how to make an audio drama production, and then allowed them to make one themselves. A few years later, GenJ was tasked with leading the youth program for the teens of homeschool leaders, an annual conference held in Orlando, FL. They decided to use their audio drama program.

The challenge was finding a guest speaker. Immediately Phil Lollar came to mind, and Lorrig reached out to him on Facebook, inviting him to fly to Orlando and teach the program. Lollar was excited about what they were doing and agreed to come.

In Orlando, the GenJ crew and Lollar began talking. In between sessions, they discussed politics, culture, and what inspired certain Odyssey episodes. They even all went to Disneyworld for a day. One night while sitting around a conference room table in their hotel, they began asking, “What could we do together?” It was in that moment that Iliad House was born.

“Our goal is to see great stories well told,” Lorrig said. “We want to create something where young people can enjoy learning. I love learning, but the best kind of learning is when you don’t realize you’re learning. That’s one thing that telling good stories does.” 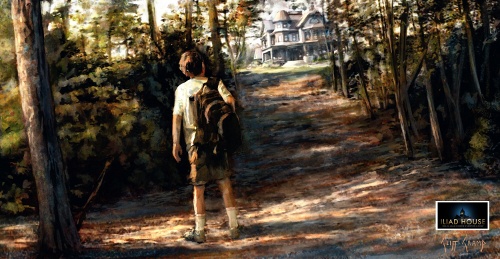 Illiad House follows the story of Jesse, a teenaged orphan, who goes to live with his uncle on a strange island – an island that doesn’t allow cars. Jesse discovers a myriad of eccentric shops and quirky characters, from a female German blacksmith who also owns a ballet studio to an old train that moves through time.

“Jesse isn’t perfect; he does stupid stuff,” Joel Grewe, Director of Generation Joshua said. “But failure is not an end – it’s just a process. And there is redemption to come.”

Grewe’s vision for the program is that it becomes a tool for parents to help build Christian character in their kids and provide examples for what that character looks like lived out. As the parent of a three-year-old son, Grewe has become astounded at how much the media is in opposition to Christian values. He realized that most programs on TV are fun, but are cruel, cutting, and intensely sarcastic. The more he watched different programs, the more he realized he didn’t want his son learning from those shows.

When Grewe and his wife put something into their son’s life, they see it displayed immediately. There is an almost instant turnaround. Grewe realized this is the same for all kids, and today’s programming isn’t helping.

“You see a lot of kids today that have lost their independent willingness to work hard on a project and dream big,” he said. “There’s less of a firm moral that this is right and this is wrong. There is less of a desire to change things. They aren’t trying to do something bigger that leaves a mark on the world we live in.”

Iliad House presents an alternative for kids by training them to do what is right and true. It wrestles with difficult questions in a way that is designed to strengthen the faith of its listeners. It is also constructed to build the imaginations of young and old alike. 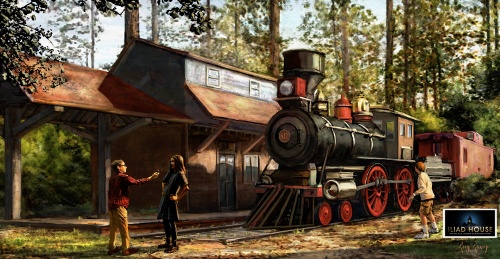 “Audio drama is incredible because it engages the imagination like very few other genres can,” Lorrig said, noting that he loves both reading and movies. “But when you read, you have to bring more to the table, because you don’t know the inflections [of the character’s conversations]. Film gives you too much for your imagination to really get fired up, and one of the limits of film is that you can’t see everything. Audio drama exercises the brain’s creativity. The brain is a remarkable machine that can create and fill in what a film producer can’t create.”

To fund their project, the Iliad House team launched a Kickstarter campaign, designed to pay for a pilot season. The campaign is all-or-nothing, in that if it doesn’t meet its goal, then the Iliad House team doesn’t receive any money and none of the donors are charged. To donate, watch promotional videos, or listen to a snippet of the pilot episode, click here.

Peter Forbes (Literature, ’09), the team’s fundraising and campaign strategist, has been encouraged by the positive feedback toward the project.

“The things that drew you to the project in the first place are going to excite other people,” he said. “The storytelling on this project is going to be top notch. We really want to focus on the story, because it’s the most important thing.”

Once the project is funded, the team hopes to hire PHC students as interns. For now though, they are taking it one step at a time and are focusing on the fundraising aspect.

Lorrig observed that Adventures in Odyssey was a journey, while similarly Odysseus was on a journey. The Iliad was a battle. “We are not going to shy away from things people battle with,” he said. “Jesse is an orphan, his parents are gone, he is in those awkward teenage years, he’s in a new place, he’s making new friends. Iliad House deals with the battles of life. I think that will speak to this generation, as people who have grown up in a post-9/11 world. They realize that life can be very difficult, but that there’s hope and a peace that passes all understanding.”