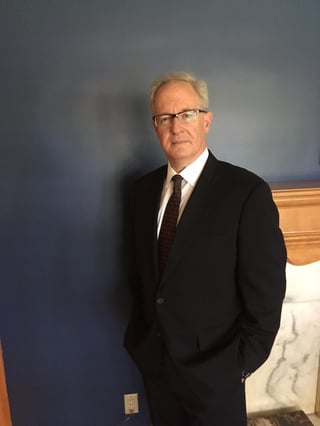 On the wall in Peter Mahon’s office in Minneapolis, MN, you’ll see satellite pictures of major hurricanes. He’ll admit it’s a bit odd, but to Mahon, it’s a reminder of a deeper theme: restoration and renewal. That’s a thread running throughout his career in insurance and investing and now, his work in Christian worldview and prison ministry. It’s also the reason he and his wife Debbie have been longtime friends of Patrick Henry College. Recently, Mahon sat down with Founders to talk about the first American in space, the value of a classical education, and finding the heart of your life’s work.

Founders: So growing up, you had a front row seat to watch the space race, is that right?

Peter Mahon: Yes, my father was an engineer with Boeing in the 1950s and 60s at Cape Kennedy and he worked on the Apollo/Saturn program and the Minuteman Missile Program. It was something to see as a youngster. In the early days, our elementary school recessed to walk the few blocks to the beach and watch the launch of the Mercury/Redstone booster that put Alan Shepard into space in Freedom 7.

Founders: That must have been amazing. Do you remember a lot about growing up in that world?

Mahon: The launch of Apollo 11 was something to behold. Growing up around these tough minded engineers, they expected you to know your data. Many, like my father, had seen combat in World War II and Korea. Nothing in the space program came right off the shelf and so they had to create all of it; to venture and “just do it.” I hope some of that mentality seeped into my work life in the way I love trying to figure things out.

Founders: So your father was an engineer but you ended up on a different career track?

Mahon: My plan was to be a lawyer, and I thought that finance and accounting would be a good pre-law foundation. To my surprise, I enjoyed those disciplines themselves and out of college joined one of the Big Eight accounting firms. Specializing in the insurance and reinsurance, I moved into industry and became a CFO during the first half of my career and a research analyst and partner with an institutional hedge fund the second half of my career.

It was a lot of fun and I am grateful to have been in roles with corporate and financial puzzles to solve. Catastrophe reinsurance – sourcing the capital to rebuild after those hurricanes – was an intriguing business, both when working in the industry and later when investing in it. It wasn’t rocket science, but it was still quite challenging.

Founders: You said you always enjoyed trying to figure things out. What’s a challenge that stands out from your career where you were able to do that?

Mahon: Insurance companies experienced a perfect storm of losses from many sources in the 1990s.  Significant losses ended up in the London Insurance Market and at Lloyd’s, and one of my assignments was a market-wide initiative to accelerate historically slow-moving claims for the benefit of creditors. These quasi-liquidations were part turnarounds and part burial detail; not a pleasant task. What redeemed the experience in the end was creating a framework that did help restore creditors.

Founders: Now that you’ve stepped back from your investment work, where do you put most of your energy?

Mahon: A large part of my available time goes to serving on the board of the Colson Center for Christian Worldview, in lay Christian worldview education, and in prison ministry. Much of the work I do falls into the category of restorative justice. Whether it’s investing or teaching budgeting to inmates, I see the framework as hope-filled apologetics. I’m grateful for having had the chance to know and learn from Chuck Colson and to become a Colson Center Fellow. Chuck was probably the greatest influence in my life over the last fifteen years; longer if I think back to his writings in the 1980s.

Founders: As you think about your work, whether it’s insurance, investing, prison ministry or education, do you see any themes? What are some big lessons you’ve learned over the years?

Mahon: Fundamentally, I’ve learned that there is hope. The world is broken, the economy is broken, and companies are broken, but we still have real hope. The broken things –even prisons– are collections of people, and as people they are God’s image-bearers. And by God’s grace, people are redeemable. That is great news. Whatever sphere of life in which we find ourselves, there is hope. That’s the overarching lesson.

Founders: You care a lot about Christian worldview and education as well. At what point did Patrick Henry College first come on your radar?

Mahon: We’ve known PHC from its founding. Before we lived abroad with two young children, Debbie began researching home schooling and applying the Christian worldview to education. Being a natural teacher, she launched us into homeschooling while living in London. With its many museums and history all around, it was a wonderful place to start. When we returned to the U.S., we joined HSLDA and began many years of learning about classical Christian education; much of it from Patrick Henry.

Founders: There are obviously no shortage of causes or colleges. To borrow from the investment world here, what would you say is the return on investment at PHC?

Mahon: PHC is a small school but it’s having a disproportionately large impact, which continues to compound. Einstein called compound interest the eighth wonder of the world, but educational compounding is even better. It’s wonderful to see the graduates snapped up as they go to top law schools and grad schools. They are also highly sought in fields where critical thinking, attention to detail, and ability to deal with complexity are required. That’s a testament to the quality at PHC and how students are taught to ask “why?” not just “what?”

PHC is all about putting first things first, and getting terrific second things thrown into the bargain. The college is a wonderful example of educational reformation: a classical education founded on God’s immutable truth, beauty, and goodness that gives young men and women the confidence of their convictions and produces real servant leaders. That’s a vital need, because on many fronts you could say the country has lost its nerve, lost confidence in what we’re about. That can be restored, God willing. PHC is a generational idea, and the problems we have in society are generational. It is rewarding to be part of an institution combining day-to-day hard work and excellence with a clear vision for the long haul.

Who knows, maybe we can even throw space exploration into the bargain.