It really widened my world, and I understand more how to interact with people from around the world. 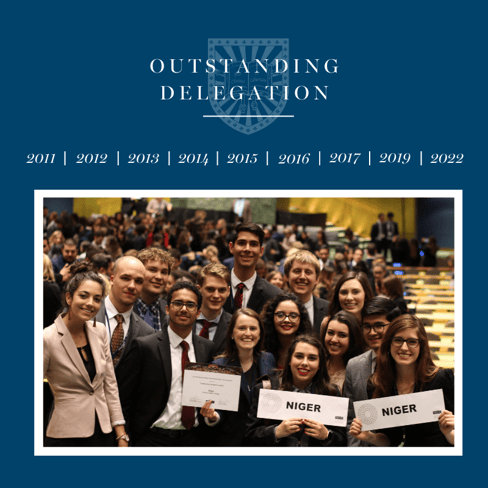 Model United Nations is an academic simulation of the United Nations and aims to give students first-hand experience in multilateral diplomacy, bringing quick thinking and compromise to the negotiation table.

It brings together students from a variety of different countries, backgrounds, and political views to discuss solutions to global issues such a nuclear proliferation and human trafficking.

In the conference, students from across the globe represent delegations from different countries and serve in UN committees, such as the Security Council, the World Trade Organization, and the General Assembly.

Acting as foreign diplomats, students are expected to remain in-character, referring to each other only by country name while in competition rooms.

The contest helps undergraduate students to better understand the purpose and methods of the UN—which students from more conservative schools typically view with deep skepticism—and to see global affairs from an international perspective.

"Such a perspective," says PHC Chancellor Dr. Michael Farris, "is crucial to leaders in this day and age."

PHC has regularly earned the "Outstanding Delegation" award, making PHC one of only 18 schools of over 300 participating internationally to receive this highest honor each year.