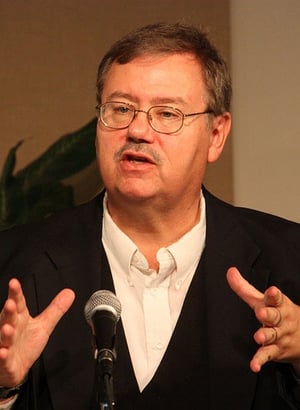 Former Dean of Academic Affairs and Professor of Government

Frank Guliuzza had faithfully served the Dean of Academic Affairs at Patrick Henry College.  He also served as the College’s Pre-Law Advisor, coaching the College’s mock trial and moot court teams, and as Professor of Government.

In his academic career, he has been recognized four times for "Outstanding Teaching in Political Science" by the American Political Science Association (2000, 2003, 2004, 2008).  While at Weber State he was awarded The "Endowed Professor" in the College of Social & Behavioral Sciences, and, in 2003-2004, he was presented with what is perhaps Weber State’s most prestigious faculty honor – The "John S. Hinckley" Award for excellence in teaching, service, and scholarship.  He was the recipient of the Dello Dayton Award in 2008 and the Congressman Neal Smith Award from the American Mock Trial Association (2008) for his exemplary contribution to law-related education.   In 2003, he was selected by the Council for Advancement and Support of Education & Carnegie Foundation for the Advancement of Teaching as "Utah Professor of the Year."  He has also been listed in Who’s Who in Teaching twice (2005, 2006), and was in Who’s Who in America (2011, 2013-2016).   Now he’s a lifetime recipient of recognition in Marquis Who’s Who.

He was the immediate past President of the American Mock Trial Association (AMTA), and was the past President of the American Moot Court Association (AMCA).  He was a former President of the Western Association of Pre-Law Advisors and the Pre-Law Advisors’ National Council.  His pre-law students have earned admission, typically with scholarship or other financial support, at dozens of law schools including: Yale, Stanford, Harvard, Columbia, Chicago, NYU, Penn, Duke, Berkeley, Penn, Virginia, Michigan, Northwestern, Cornell, Georgetown, Texas, UCLA, Vanderbilt, Washington (St. Louis), Emory, Minnesota, Emory, Southern California, Iowa, and Notre Dame.  Several of these students have gone on to serve as editors of law reviews, win law school moot court national championships, and clerk on state and federal appellate courts (including the United States Supreme Court).

He is the author of Over the Wall: Protecting Religious Expression in the Public Square (SUNY: 2000) and an author in, and the co-editor of, Before the Paper Chase: The Scholarship of Law School Preparation and Admissions (Carolina Academic Press: 2012, with Tim Garrison).  He authored, Mr. Chief Justice, and May it Please the Court: Compete in Moot Court Like a Champion.  He had published articles and reviews in a number of journals including The Marquette Law Review, The Drake Law Review, The Willamette Law Review, The Journal of Politics, The Review of Politics, PS, American Political Science Review, and Academy.

In 2000, he ran for the United States Senate and, in August, 2001, was elected Vice Chairman of the Utah Republican Party. His wife of 30 years, the former Kathy Spaulding, died in 2012, and he later was remarried to attorney Ann Holcomb and relocated to Brunswick, Maryland. Frank had been the “Dad” of Matthew Williamson and the late Timothy Stoddard.

Dr. Guliuzza passed away in his sleep on February 26th, 2019. "At this moment, he is in the presence of the LORD and probably reflecting on his Sunday’s Comin’ sermon. Sunday did come for "Dr. G." Hopes beyond hopes fulfilled. A life fully lived for God’s Glory." –Jack W. Haye, President, Patrick Henry College.