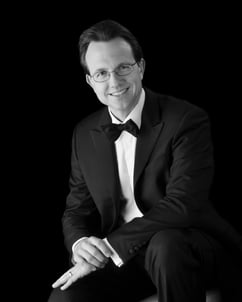 Dr. Scott McCormick directs the Chamber Orchestra, Percussion and Harp Ensembles at PHC. He received his doctoral degree from Indiana University Bloomington in Music Performance and Literature (Viola). He is also the orchestral director at Langley High School in Fairfax County, where he directs one of the largest high school string programs in Virginia. His orchestras have received numerous local and national awards and have performed in Boston Symphony Hall, the Kennedy Center, Carnegie Hall and in Europe. He remains active as a performer and is a core member of the Washington Bach Consort, the area’s premiere baroque orchestra and chorus. He specializes in the performance of early music on violin, viola, and the viola d’amore, an unusual baroque instrument with sympathetic strings. One of his viola d’amore performances was broadcast nationally on CBC radio. He has performed as a soloist with the Richmond Symphony, Pennsylvania State University Baroque Orchestra, and at the National Cathedral’s annual performance of Bach’s St. John Passion.

Dr. McCormick and his wife Rebekah have two children and live on a small farm in Loudoun County.