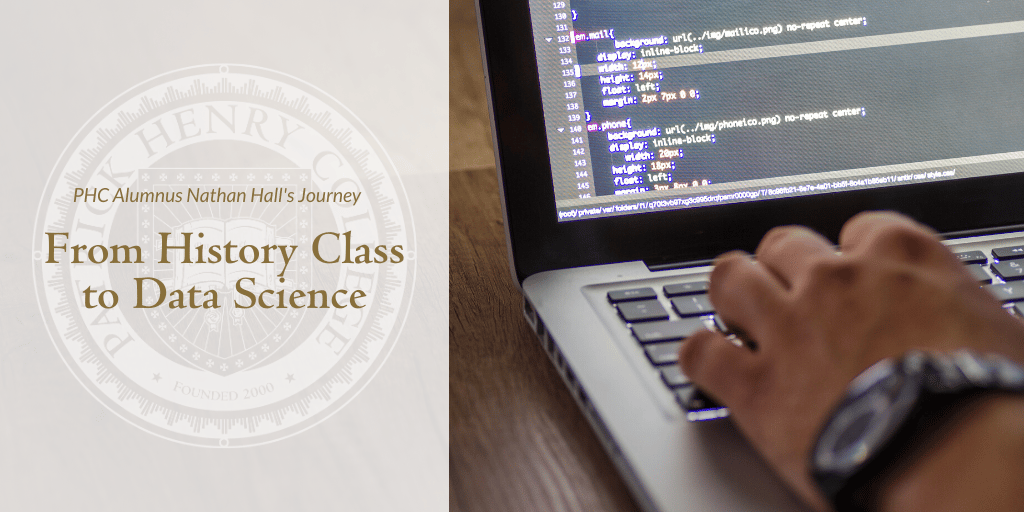 Nathan Hall graduated from PHC in 2013 with a major in Classical Liberal Arts (CLA). Now, he is a data scientist doing contracted research projects for the Department of Defense.

“The benefit [of a PHC education] was unbelievable in terms of learning on a much higher level than what I thought I was capable of,” Hall said. While his original plan at PHC was to be a teacher, the skills he learned at PHC and experiences after graduation proved invaluable to where he is now.

Hall’s first two years at PHC were challenging academically, but they helped him realize that college isn’t about idolizing one’s GPA—it’s about building relationships and growing as an individual. “That was the main reason for me to decide to stay was the people that were there,” he said.

After he decided to stick it out, “I really did get to have that liberal arts experience where I wasn’t picking classes because I was worried about my GPA,” Hall said. Instead, he chose classes because they interested him. “If you like it, that should be reason enough for you to explore it.”

His CLA major enabled him to take a good sampling of history, math, and science classes. He remembers during one of his calculus finals, “I was sitting at a table, it actually was a proof that required me to flip a page at least eight times to get to the final solution to prove it out.”

His then-friend and now-wife Sarah commented, saying “This is so weird that you’re smiling.”

His response: “This is so cool!”

PHC’s liberal arts curriculum allowed Hall to have a unique approach to math and science. “There was something I liked about solving a problem and seeing the puzzle pieces in front of me—understanding [them], understanding how to put it together, and learning how to take it apart,” he said.

Hall advises students looking to be successful in any field to be “always seeking out those places where you’re going to feel like you’re the dumbest person in the room. It’s actually a really good life strategy.”

Boot Camps and Beyond

After graduating from PHC, Hall worked in a managerial position at a software company for a couple of years. The experience “really spurred my interest in the (data science) field,” he said.

To immerse himself in the subject, he took some part-time classes about data science, AI, and machine learning and then attended an intensive boot camp called General Assembly. “I’m a big, huge, massive boot camp fan,” Hall said.

“There were a lot of institutes in the area that taught data science,” according to Hall. But General Assembly stood out to him, because “it was the only one that I went to where I listened to the content of just the discourse and immediately it had the reminiscences of, ‘This feels like PHC,’” he said.

After the boot camp, Hall landed a job in the intel community and was able to work on his master’s at George Washington University. Even though Hall was already qualified to work in data science, the process of getting a masters gave him the benefit of what he calls “future proofing”—preparing right now for potential problems in the future.

A lot of research projects in data science focus on future proofing as well. They examine potential problems that could arise in the future and ways to be prepared in the event that they do come. “It’s the type of problems in data science that don’t have a solution yet,” Hall said.

While at PHC, Hall didn’t learn about data science, AI, or machine learning directly, but “coming from a different background than most data scientists—especially coming from a conservative Christian background—having that perspective of being able to have a discourse with somebody, being able to talk through all of the logic, is something that was honed early on at PHC. It definitely enabled me to have conversations with the folks in the data science community.”

The liberal arts mentality of being open to all subject areas and “realizing how everything actually connects together, having a consistent theoretic for it all, that’s a useful skill,” Hall said.