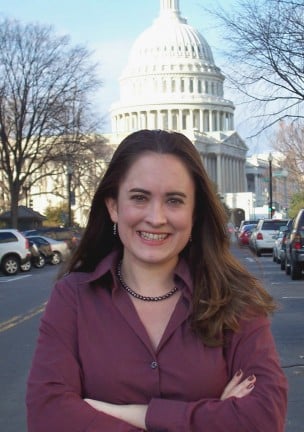 Late nights. Living out of a suitcase. Floor vote recommendations. Legislative research and analysis. All have become an almost daily part of life for Leeann Walker since graduating in 2005 from Patrick Henry College.

"Blessed are the flexible for they will not be broken or unduly bent out of shape,” says Walker.

For a Congressional staffer operating in the heady world of Capitol Hill politics, they are words to live by. Over the last four years, Walker has worked for two Republican Members of Congress. Because of strict policies restricting staffers from appearing in the press, she has asked that the name of her present employer not be mentioned.

A typical morning at the office starts by skimming the news, reading up on the day’s legislation, and meeting with different advocacy groups.

“If my boss needs more information on any of the bills,” she explains, “I write memos or talking points that present the major point of contention or issues at stake.”

And those are just the morning’s tasks. In the afternoon, Walker often finds herself doing everything from attending Committee meetings with the Congressman to providing vote recommendations or helping to craft legislation.

“I work to promote sign-on letters or whatever legislative initiative my boss is focused on at this point,” she adds.

Walker says the ability to learn something new every day at work is one of the most interesting highlights of her job.

“When you realize that a member of Congress is vesting so much in your analysis and opinion of an issue, it’s humbling and exhilarating all at once,” she says.

And in what might strike some as a surprise, given Washington, D.C.’s frenetic lifestyle, Walker  says the work atmosphere – “where you’re more like family than co-workers” – has become a daily highlight.

Walker credits her time at PHC for helping to develop her professionally in all respects.

“My coursework and extra-curricular activities did a great deal to prepare me for life on the Hill,” she said, “My involvement in the debate team did more to hone my analytical skills and ability to look at a policy issue from every possible angle than anything else.”

She also noted that she acquired the valuable skill of writing in a clear and concise fashion under the watchful eye of her government professors. Looking back, Walker says her rigorous PHC education came as something of a revelation. As the first public school graduate to attend PHC, she underwent something akin to culture shock upon arrival at the nation’s preeminent college for homeschoolers.

“I knew nothing about homeschool culture, and I had to learn fast,” she said.

Added to the confusion was the fact that Walker’s high school graduating class was four times larger than PHC’s student body.

“At first, I remember feeling very left out because it seemed that everyone around me was speaking another language,” she said, “All these homeschool acronyms were being thrown around me, and I was just trying to find someone who was in their high school marching band, newspaper, or anything.”

Now, she says she is the “first to correct people when they make gross generalizations about homeschoolers.” How did it happen?

“The divide eroded over time,” Walker recalls. “I learned to crochet and wore long denim skirts for a while and brought my homeschool friends up to speed on pop culture. It worked well.”