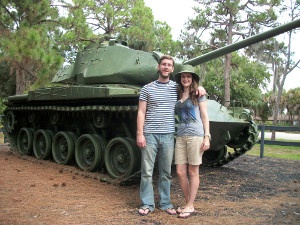 When Jesse Buchanan was called in to work nights, he would sometimes visit his office’s basement, filled with treasures spanning 150 years. He loved to look over the timeworn artifacts and remember what the world used to be like. He once found a lead plate used to print the old papers. It stirred up memories of when newspapers were the center of activity around the community, when people faithfully read the morning paper over coffee and a bagel, when being a journalist meant you worked for one of the biggest institutions in town. But now, Buchanan observed, because of radio, television, and the Internet, there is no longer just one gatekeeper for community. The world is different now.

Buchanan (Journalism, ’12) works as a reporter for the Record-Journal in Meriden, Connecticut, a job he has held for almost four years. He acquired the job during his junior year at Patrick Henry College, and has happily remained there since.

While at his job, Buchanan recently received a journalism award issued from the Connecticut Society of Professional Journalists. The organization hosts state wide journalism awards each year. Different journalists from a variety of state-wide papers are chosen to receive a certificate and be honored at a banquet for their work on an individual story. Buchanan received an award this year for his story “SUV hits gas truck,” which chronicled a local tanker fire in one of the towns he covers.

He works as a beat reporter. For the past three years, he covered a tiny suburban town, but he was recently chosen to cover a larger town.

“I enjoy the steadiness of working on a beat and getting to know the players and actors in a town and how the town works,” he said.

He believes the idea of having a newspaper is an important medium to preserve, as it keeps people honest, providing an objective view of events.

“When you lose objectivity, you get a skewed view of the world,” he said. “People gravitate toward the sources they agree with, which just increases bias. Most online publications are generally opinion based. People tend to go online for opinion, and papers generally seem to be the sources of objectivity.”

With the influx of online papers, videos, and blogs, newspapers are, in some people’s opinion, on their way towards becoming obsolete, and Buchanan said he sees sadness among older generations as they watch newspapers decline. They are some of the last people who remember what it was like for newspapers to thrive, and they continue to faithfully read the paper each day.

Buchanan does not see a problem with papers going digital, as long as objectivity and source verification is preserved.

“The new online journalism is maintaining the tradition of responsible journalism, and I hope it does well,” he said.

Record-Journal's website is continually updated with stories, videos, graphs, and pictures. Buchanan calls it a “transition time” for papers, since they seek to reach out to two audiences, continuing to write for a print readership while working to maintain a robust website.

“We are doing two different things for two different markets,” he said. “It’s tough. If it was just one or the other, would be easier.”

Interestingly, as his generation has seen the end of some older things, and the dawn of some new things, Buchanan has difficulty imagining how journalism would be done without the Internet. While, in decades’ past, journalism required a lot more leg work, he uses it for everything – to fact check, to track down phone numbers, to archive information.

During his time at PHC, Buchanan did more than just write. He met and fell in love with another student named Jessica. When they first met, however, they immediately disliked each other.

“She thought I was arrogant and obnoxious, which was very true,” he said.

But after working together in the facilities department, they were surprised to get to know each other and learn that there was more to the other person than first met the eye. They were married in 2010 and currently live in Connecticut.

Buchanan said PHC taught him a lot and helped him become a well-rounded person. One of the things he is most thankful to have learned is the importance of community, particularly a Christian community. He misses being able to attend chapel and refocus on Christ daily.

“It’s nice to attend something every few days to remind you of your purpose and what you are doing,” he said. “I think it creates a hunger of a Christian community of that kind, where there is interaction, growth, and sharpening.”