The Girl with the Camera 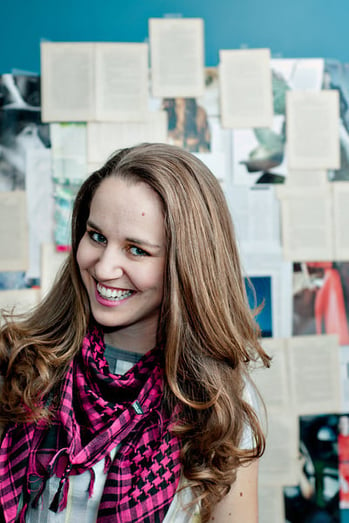 On her sixteenth birthday, Jennifer van Leeuwen (Government, ’07) received a manual film camera from her dad. It was the moment her passion for photography began. Throughout high school she entered and won a number of photo competitions, and even thought she’d taken up different interests and began focusing on other dreams by the time she entered college, she never lost her label as “the girl with the camera.”

Van Leeuwen chose to attend PHC because she wanted to receive an academically rigorous Christian education. She wanted to have opinions in the classroom and learn to eloquently articulate her opinion. She was also drawn to PHC’s emphasis on internships and hands-on learning.

During her freshman year, her parents informed her and her siblings that they would be spending two years in Nairobi, Kenya as missionaries. Being 9,000 miles away from her parents during her sophomore and junior year of college was difficult for her, especially since there was limited communication due to differing time zones. However due to PHC’s DRW (directed research and writing) courses, she was able to move to Nairobi with her parents for a semester and spent her time researching government involvement in public transportation.

During her senior year at PHC, she took her first set of engagement pictures. While she enjoyed the shoot, she never considered photography as a viable career. To her, it was more of a pipe dream. After college, she moved home for a year and worked full-time for Representative Virginia Foxx (NC-05), to help her pay off her student loans, after which she bought her first DSLR camera as a celebration. The more she played around with her new camera, the more she fell in love with it and dreamed of working full-time as a photographer.

She began to realize that sitting at a desk for 40 hours a week was not something she was particularly passionate about and began getting up early to edit pictures before work and scheduling photo shoots after work. She would stay up late to edit and process the pictures, and watched as her dream began to grow a little bigger. That summer she named her photography business Jenni Marie Photography and shot four weddings.

For van Leeuwen, photography is more than just a career: it is a platform to show the world that they are made in God’s image.

“Every person in the world has been created uniquely beautiful by a wonderful God,” she said. “No, we’re not all Hollywood icons. No, we don’t all fit the idealized version of beautiful that the magazines portray. Eyes might be too small and nose might be too big and weight might be a little over or under our definition of perfect. But everyone is made by a perfect God as a way to reflect His image. Therefore, we’re all beautiful.”

In college, van Leeuwen struggled with understanding this concept. She felt ugly and could easily list her flaws without being able to list attributes. Due to conversations with her roommates and an RA (resident assistant), she began to learn that she was a daughter of the King and He had made her beautiful.

“That’s why I take photos,” she said. “I want to show my clients how beautiful God made them. My theory is that every single person is beautiful, [but] it doesn’t do anyone any good unless someone sees that beauty and then lets you see it too! That’s my job: showing my clients that they’re beautiful, and that God made them that way, and that He loves them just the way they are.”

More recently, van Leeuwen has felt called to use her camera in a different way and serve as a missionary photographer.

“We’d known lots of family and friends who lived in, grew up in, served in, or visited Africa,” she wrote on her blog. “So why did I know so little about life on the mission field? It’s obvious, really. These missionaries were on the mission field with a specific purpose. That purpose took time, energy, effort, brain power, sleep deprivation, tense meetings, grueling schedules. The missionaries didn’t have time to be taking photos, writing stories, sending emails, creating videos, updating social media.”

Ideas began flying and van Leeuwen realized that when missionaries didn’t stay connected with friends in the states, their supporters would be unaware of their needs and opportunities to give.

“I’m a writer, a storytelling, a photographer,” she thought. “I’m a traveler, an adventurer. I can tell those stories, take those photos, connect those supporters.”

“I am so incredibly humbled to sit back and look at how much has happened since I was just the girl with the camera at PHC,” she said.

She currently resides in British Columbia with her husband John, who she met in Uganda.