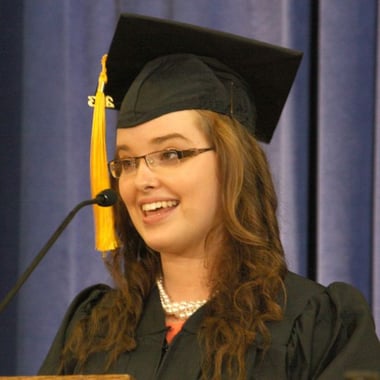 On Saturday I spoke at my college commencement, wearing these snakeskin heels that reminded me of the foot bindings that slowly broke the bones in the feet of Chinese women. But the speaking, and even the walking in heels, came easier than the writing of the speech.

The task of creating a good-bye speech for college grieved me with its impossibility. How could I describe the kindness through difficulty I experienced there? Who could I thank and how could I thank them in a way that would mean enough?

I wrote the speech. I printed it, cut it up into separate paragraphs, rearranged them, added new ones, bled pen on them, and read them aloud to myself in the mostly deserted dorm. Sooner than I wanted, I stood in front of everyone at the podium—the top of which, despite the dean’s fears of my being too short, I could see over without a stool. The microphone transmitted my address to the gymnasium, and to everybody’s aunts who observed from the internet.

I left out 7,000 stories I could have told. You can only say so much with an antsy audience and breaking feet. So to the usual fears bound up in public speaking (stuttering, tripping, falling, fainting), I added the fear of having chosen all the wrong stories.

But the speech amounted to the best thank you I knew how to say with the time and mental energy that remained to me.

It’s over now. Today our car zips through Pennsylvania on Route 15, over green hills that look like dragons sleeping on their stomachs.

After four years of school, commencement, checkout, cleaning the dorms (including about three floors of baseboards in the boys’ building), and a daylong job interview, I am finally going home from college. The desire pulses in me not only to go home but also to spend time utterly alone, with the possible exceptions of a neighborhood cow and my mother.

My earthly possessions almost crowd me out of the backseat. “I feel like a miracle just happened,” says my mother as we cross the border into New York. The miracle? Twofold: I graduated college instead of giving up, and our car made one last round-trip from Upstate New York to Northern Virginia without dying.

My exhaustion prevents me from pondering the ways in which college has made me a person of divided allegiance, who has to move between two stories she loves. I speed home, but I leave another home behind, and a hundred choices of what to do next lay at my feet.

As we pull into our driveway, my black dog, Jack, runs out to us. We shove my luggage in through my bedroom window—comically more efficient than using the door. Soon I stand over the stove in the house in which I learned to bake bread, paint pictures, memorize Bible verses, and laugh hard over dinner with rowdy guests. I have always been more sticker than boomer, tied closely to the apron strings. Nothing sounds better to me now than never leaving again. I know I will, and it makes me cry.

My consolation is this: God always chooses the best stories.