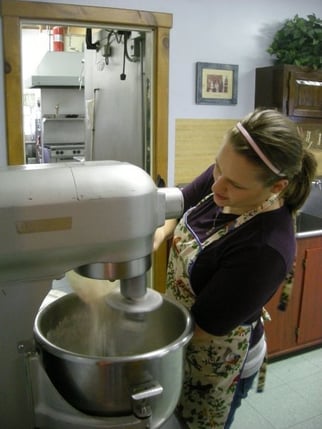 Three and half months into her new job, Cami Helm realized that, although PHC had taught her a lot, there were gaps in her education. She didn’t know how to chop wood. Or de-feather turkeys. Or counsel women struggling with inner demons.

For the past year, Helm has served on staff as a kitchen supervisor and mentor at His Mansion, a non-profit, mostly self-sufficient community located on 360 acres of breath-taking New Hampshire farmland. His Mansion offers a refuge to people fighting various addictions.

“Residents” enter the year-long program voluntarily, and receive counsel and encouragement from staff “mentors.” As residents work side-by-side with mentors to keep the farm, they’re challenged to deal with their problems, be they eating disorders, pornography, depression, drugs, alcohol, even self-mutilation. It is challenging work that forces mentors like Helm, on a daily basis, to face their own short-comings.

“This place doesn’t allow for frilly faith,” Helm said. “Being here has shown me how weak my faith really is. Ultimately, it’s not warm fuzzies, but rather foundational truth that sustains us in the storms of life.”

In 2005, after receiving her diploma with Patrick Henry’s second graduating class, Cami Helm returned to Fort Lauderdale. She put her Bachelor’s degree in Government to use, working for the Florida House of Representatives and serving as a legislative research assistant. The experience was both enriching and, conversely, oddly discouraging for Helm, who found herself lamenting how far removed the government was from the local people.

“Patrick Henry encouraged us students to get our hands dirty,” Helm said. She wanted to do more than write policies.

After reading 1 Corinthians 10:7 (which deals with idolatry and the “live in the moment” mentality), Helm reexamined her faith. “I never thought of myself like the people who gave jewelry to make the golden calf,” Helm said. “But then I saw the similarities.”

Helm asked herself, “Cami, is it really sacrifice, just going to church? You don’t really evaluate how you spend your money. You get to choose who you spend your time with and who you let into your life.” She began to consider working at His Mansion, viewing the job’s $100 monthly stipend as a faith opportunity rather than a pay-cut. She filled out their application. In the summer of 2008, Helm was accepted, and that September she journeyed to rural New Hampshire to begin the most intense period of her life, both physically and spiritually. 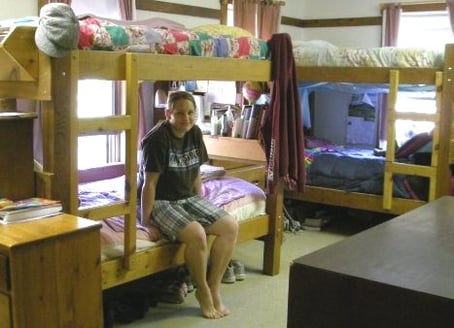 “There have been so many transformed lives, so many miracles of grace…it’s hard to put them into words,” Helm says. Some of them women with whom she’s built friendships are anorexic to the point of emaciation, or have severe cravings for drugs and alcohol. “I see them, and I know that if it weren’t for the grace of God, I could have gone down any one of those paths,” Helm says. This year, His Mansion has fifteen female and seventeen male residents, and numerous stories of the power of God’s transformative grace. “This is a place to be away from temptations so there can be healing,” Helm said.

Helm remembers the emotional transformation of one woman, Britney, who was terrified the His Mansion staff wouldn’t or couldn’t accept her if they really knew her past. She was enslaved to her fear. Helm and others told her God’s love was bigger than her past, but Britney kept saying, “I know it in my head, but not in my heart. And if I tell you these things you aren’t going to love me.”  Yet after several months, Britney shared her story, and was amazed that the staff really did keep on loving her. “It was amazing to watch her walk in freedom, unshackled from the guilt of her past,” recalls Helm.

Although she is not walking the halls of political power or drafting legislation to end abortion, Helm knows she is adhering to the mission of her alma mater.

“When I was at PHC, (literature professor) Dr. Hake quoted John 12:12, and that verse has stuck with me,” Helm recalled. “In order for fruit to produce much fruit, it has to die.”

Helm often works from before sunrise to after sunset, but she does not complain. “The fields are white; the harvest here is white. They came to us, and we know our time is not our own. ”