An Assistant Director for Heritage 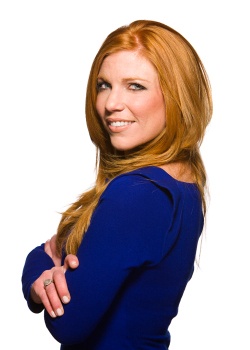 Even prior to graduating from Patrick Henry College in 2004, alumna Audrey Jones (Government) worked as a field director for the Bush-Cheney re-election campaign, managing eight counties in Florida. She “survived four hurricanes,” she says, while opening local headquarters, coordinating events for President Bush and Vice President Cheney, organizing volunteers, and working to get out the vote.

As Assistant Director of Broadcast Services at the Heritage Foundation, she spoke about President Obama’s idea of tax rebates for electric car buyers.

“Really what it boils down to is the source of innovation and freedom itself,” she insisted. “The President seems to think that he should inspire the American people through subsidies and regulations out of Washington. The American people from the time of the automobile to the light bulb to Apple computers have been inspired by freedom and the ability to make a profit.

“I would just say, reduce the barriers to innovation, and watch the market take off,” she concluded with a smile.

Although this opportunity marked Jones’s first television appearance, she has co-hosted a national radio show on the SiriusXM satellite radio’s Politics of the United States (POTUS) channel during the 2008 presidential race. The show, focused on the policy views of college-age voters, garnered 1.4 million listeners on average. Before starting at Heritage in 2007, Jones accrued spokeswoman experience as a press secretary for Rep. Scott Garrett (R-NJ). And before that, she served as associate director of communications for the 2005 Base Closure and Realignment Commission.

“Patrick Henry College equipped me with the hard policy knowledge I have needed as background to write press releases and explain somewhat difficult topics to reporters and producers,” says Jones, who has done media outreach for topics as diverse as defense spending, financial regulations, political analysis, and now energy and the environment. “The world needs good communicators standing up for what is right—protecting the innocent and defending freedom.”

On a daily basis at the Heritage Foundation, Jones works to give conservative values a voice on local and national TV and radio. She also has focused specifically on the non-profit’s energy and environmental initiatives and on a project to increase national defense spending so that the United States can “pursue peace through strength.” As part of her job, she also seeks innovative ways to integrate new kinds of media with the more traditional ones.

In general, Jones downplays her achievements, stating, “I’m still very small.” And she gives all the credit to God, explaining that “the stories I have as to how He has provided for me in my journey after PHC are numerous.”

When Jones first came to PHC, for example, she was the College’s very first transfer student. Previously, she relates, she had been “plotting a course to an Ivy League for years.

“But I never would have expected the College to lead to such fantastic internships and opportunities,” she marvels.

The last seven years, she says, have seen their share of ups and downs, along with success. The advice she gives to current and future classes, then, is “to never give up."

“When God gives you talents, do everything you can to use them. Take a risk and go after your dreams,” she encourages. “I’m still going after mine.”