THE EXPANDING RUSSIAN SHADOW IN THE EAST 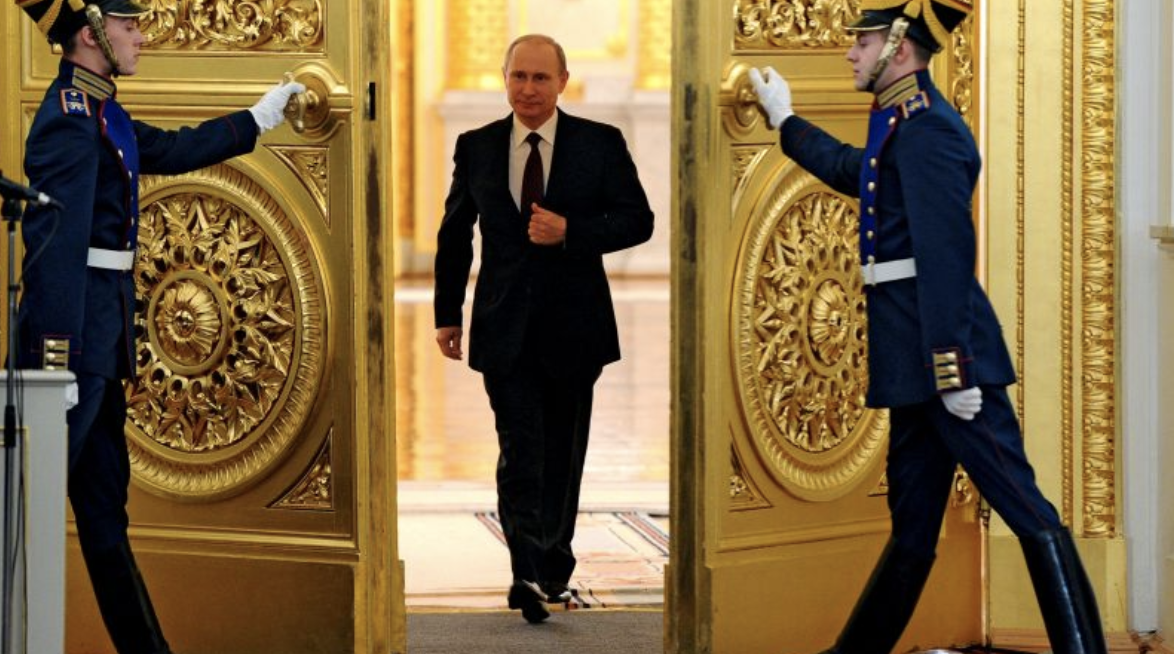 After the Soviet Union collapsed at the end of the Cold War, America assumed that the defeated Russia would no longer pose an existential threat to the United States, so the two nations became reluctant friends. Many in the United States and Europe hold the mistaken belief that Russia is still merely an awkward regional power, prone to post-imperial spasms, but essentially weak.1 However, recent increases in Russia’s military power prove that Russia is neither benign nor weak. While a direct Russian attack on the US mainland is not likely, Russia’s expansionist goals may destabilize the post-cold war order unless counter-measures are taken by the West. Therefore, America must seriously consider the threat Russia poses and help discourage Russia’s expansion by augmenting NATO’s military strength with the increased presence of permanent troops in the Baltic States.

The Western world threatens Russia’s plans of hegemony over Eastern Europe. In a speech, Putin asserted that, “Russia has been a great power for centuries, and remains so. It has always had and still has legitimate zones of interest.”2 Putin’s invasions of Georgia in 2008 and his annexation of Crimea in 2014 make these zones of interest clear. Throughout the President’s leadership, the goals of domestic stability and foreign conquest have driven his actions. Former Kremlin political adviser, Gleb Pavlovsky, recalls that every Russian President since 1996 has promised to restore the Soviet Union.3 Convinced that the United States stands in the way, Russia hopes to combat its power.4

Russia seeks to accomplish this goal partly by targeting NATO. A prominent Russian lawmaker described NATO as a “cancerous tumor on the whole European continent.”5Russian Prime Minister Dmitry Medvedev warned that if the Ukraine formally applied to join the alliance, it “would turn Ukraine into a potential military adversary for Russia.”6Russia views the United States and NATO as a threat to its security. In light of Putin’s unlawful operations in the Ukraine as well as the increasing intensity of his “snap exercises” in the Baltic states in 2015, The Economist concluded that Putin’s “overarching aim is to divide and neuter that alliance, fracture its collective approach to security, and resist and roll back its advances.”7

Despite Russia’s goals, many believe that Russia does not have the military prowess to pose a significant threat. Pavel K. Baev, Federal Executive Fellow of the Brookings Institution,asserted that Russia’s military is in such decline that it hardly would have the capability of invading other nations. However, General Joseph Dunford told the Senate Armed Services committee, “If you want to talk about a nation that could pose an existential threat to the United States, I would have to point to Russia.”9 Indeed, Russia’s recent military performances demonstrate the error in military pundits such as Baev’s thinking.

After Russia suffered the embarrassment of defeat in Georgia in 2008, it began to significantly upgrade its military forces. Brookings Institute reveals that, “Almost none of our NATO allies could match what Russia has done so far in the skies.”10 They have been flying around 48 to 96 sorties daily, which is roughly the same number of strikes that the American-led coalition targeting the Islamic State has been carrying out each month. Similarly, Russia’s upgrades to their navy have allowed it to fire cruise missiles at targets over 900 miles away.10 Since 2008, Russia has also developed the capability of rapidly and unexpectedly deploying over 100,000 troops on the border with NATO.11 The United States must not operate under the delusion that Russia is a militarily declining state.

While Russia is not likely to target its force directly on US soil in the near future, its annexation of Crimea and subsequent war in eastern Ukraine reveal that Russia is able and willing to use military force against its “threats.”12 Russia sent about 4,000 troops to relieve Luhansk and Donetsk, an action that convinced current President of Ukraine, Petro Poroshenko, to draw his troops back.

Mr. Putin’s expansionist goals also place many NATO member border-states in danger. Anders Fogh Rasmussen, NATO’S previous secretary-general, warned that there was a “high probability” that Putin would test NATO’s Article 5, which considers an attack on any member an attack on all. His goal is to eventually upset the West’s Cold War alliance.13Moreover, Russia is not willing to let international codes of conduct hold it back. The country has traditionally shown caution towards NATO. However, in 2014, Russia violated NATO airspace by approaching Latvian airspace more than 180 times and Lithuanian airspace more than 150 times.13 Putin has also blatantly disregarded agreements such as the Helsinki Final Act, a diplomatic agreement signed in 1975 by all of Europe and the United States, that sought to reduce tension between the Soviet and Western blocs by solidifying common acceptance of the sanctity of Europe’s borders.15 Alarmingly, in a speech given in October 2014, Putin announced that Russia “is not asking anyone for permission” in its conduct of world affairs.16

The Threat to the US

Russia’s growing military strength, lawlessness, and aggression threaten to upset the balance of power in Eastern Europe that the international community has enjoyed since the end of the Cold War. Radesk Sikorski, Polish Foreign Minister explained that, “By annexing Crimea, Russia is forcing a major change of boundaries on Europe. It means the breaking of post-Cold War consensus. That is verboten.”14 During the Cold War, America was able to create a stable international order through its military dominance.8  Russia’s rising military prowess, along with its desire to weaken the United State’s allies, however, threatens to upset this stability. Therefore, America must send Putin a clear message that it will not allow Russia to successfully bypass international standards of conduct.

United States to the Rescue?

However, due to the significant reduction of NATO Military presence in Europe, it is uncertain whether the United States has the capability of successfully deterring Russia. Unexpected major military exercises, also known as “snap exercises,” have repeatedly caught the United States off guard. These snap exercises in the Baltic States have reached new heights. For example, one exercise included 9,000 servicemen, 250 tanks and armored personnel carriers, over 100 artillery units, 55 warships and the Iskander ballistic missile system. This exercise may have included practice for a surprise attack against a Baltic Sea nation with a brigade-size airborne unit from the Russian 76th guards air assault division from Pskov, near the Estonian border. More recently in March, Russia brought their Northern Fleet to full combat readiness and deployed 45,000 troops, 3,000 vehicles, 110 aircaft, and 15 submarines to locations near NATO’s borders. This particular snap exercise indicates a probably pre-emptive action against NATO and Eastern Europe. With Russia’s aggressive tactics in Ukraine, the US cannot dismiss the possibility that the country could expand operations.17

The United States’ inability to predict Russia’s snap operations is alarming. General Philip Breedlove, Commander, US European Command, and Supreme Allied Commander, Europe, warned the Senate Armed Service Committee that, “Russian military operations over the past year in Ukraine and in the region more broadly, have underscored that there are critical gaps in our collection and analysis.”12 Currently NATO does not have the ability to repel a possible Russian attack or prevent Russia from occupying territory in the east, in particular along NATO’s eastern borders in Lithuania, Latvia, Estonia, and Poland. Anthony H. Cordeesman, a military analyst with the Center for Strategic and International Studies warned, “The limited ground forces in Europe are not designed to suddenly project power against Russia in a number of days.”18

America must step up its game

Upholding NATO requires adaption to changing circumstances. Understandably, US military presence in Europe decreased since the Cold War, from around 400,000 troops during the Cold War to around 67,000 troops.18 The reason for this shift is twofold; the United State’s partnership with Russia following the fall of the Iron Curtain, as well as US and allies’ agreements with Russia to limit their conventional military deployments.11 The problem is that currently neither of these circumstances—reduced tensions nor substantial loss of transparency and confidence—exists.

In response to Russian aggression toward the Ukraine, the United States has taken important steps to uphold NATO by rotating US Army units to the most vulnerable NATO members. However, these rotating forces throughout Estonia, Latvia, Lithuania and Poland only consist of roughly 150 personnel each. According to Heritage Foundation’s 2016 Military Strength Index, if Russia’s snap exercises turned into an actual invasion of one of the Baltic States, these rotating forces very likely would be too small and slow to deploy to have any serious impact.12  A 1994 conflict in Bosnia reveals that even with their larger number of 400 personnel under United Nations command, the small Bosnian city was unable to defend itself against an attack from Bosnian Serb forces. This incident demonstrates how inadequate the current NATO forces in the Baltic region would be in the event of a Russian attack.

Therefore, the United States should transform the disparate Baltic nations’ force rotations into a coherent military structure that has the capability of quickly responding in a unified manner. In addition, America  should persuade other NATO allies to join it in making a multi-year commitment to proactive military presence in these states.12 NATO’s increased credibility in the Baltic region would decrease the imbalance of military power that Russia has caused in Eastern Europe and discourage a future invasion of the Baltic States.

At a time when Russia is expanding militarily, it is crucial that the United States does all it can to strengthen NATO by deploying ground troops to the Baltic region. The Economist asserted that today “the West faces a greater threat from the East than at any point during the cold war.”19 Putin continues to test the West by asserting his dominance in the international sphere. Firmly standing by NATO with increased military presence in Europe is an important step toward preserving the international order. ■