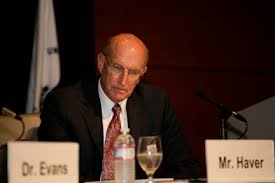 Mr. Rich Haver spoke to SI Students about his career in intelligence, and particularly Counterintelligence on September 22, 2016.
He had several key emphases in his lecture: While it is easy to tell senior leaders they are right, it’s hard to tell seniors they are wrong and that is when analysts earn their pay; why spies commit treason against their country; and the importance of HUMINT operations enabling SIGINT collection activities.

In 1999, Mr. Haver joined TRW as Vice President and Director, Intelligence Programs. He led business development and marketing activities in the intelligence market area for their Systems & Information Technology Group. He also served as liaison to the group’s strategic and tactical C3 business units, as well as TRW’s Telecommunications and Space & Electronics groups. Mr. Haver was selected by Vice President Cheney to head the Administration’s Transition Team for Intelligence and then selected by Secretary of Defense Donald Rumsfeld as the Special Assistant to the Secretary of Defense for Intelligence.

He returned to the private sector in 2003. Mr. Haver is now consulting to both government and private industry associated with the National Security and Intelligence fields, as well as volunteer work, and service on various boards and panels. He is an original member of the Board of Advisors to the Strategic Intelligence Program at Patrick Henry College and is a frequent guest speaker.