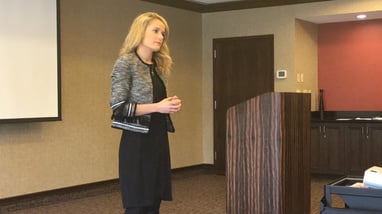 The annual APP conference is a time for students to get off campus and have the opportunity to learn about more about issues connected to their future careers.

In the past, the conference has focused on the Pro-Life Movement, Local Government, Marriage and the Family, and Technology & Politics. At the end of each conference, there is a job and internship fair featuring a number of think tanks and organizations available to network with students. Read some of the Herald articles below about past APP Conferences.

David Daleiden from the Center for Medical Progress was the keynote speaker at the pro-life themed APP conference on February 20.

Daleiden and his organization planned the two and a half yearlong investigative video project released last summer. The outcome of the project “Human Capitol,” was a series of videos that brought attention and heightened scrutiny to Planned Parenthood. Daleiden is currently facing a lawsuit in San Francisco brought forth by Planned Parenthood and an indictment in Houston.

Daleiden was introduced at the conference by his former Latin student and current PHC student, Christian McGuire.

While at the conference, Daleiden showed one of the videos from the project and explained how the project came about and what his plans are going forward.

Alliance Defending Freedom spokeswoman Alison Howard also spoke at the conference. The Director of Alliance Relations charged that Planned Parenthood's other offenses include regularly failing to report statutory rape and abuse of young girls. She also encouraged the attendees to come out to the Supreme Court steps on March 2, as the Supreme Court will hear the case Whole Women’s Health v. Hellerstedt. The case will be heard again on March 23, as the court will hear the case of religious groups fighting against the requirement of providing abortion drugs in their health care plans.

Joel Grewe, director of Generation Joshua, also shared his personal testimony at the conference. Grewe, through his work in politics, once had a conversation with Congresswoman Cathy McMorris Rodgers. When he was younger, Grewe worked on McMorris Rodger’s first campaign.

“We had the normal chitchat … and the conversation is wrapping up. [I felt like I had] a spot for one question and that’s all [I was] going to get,” Grewe recalled. “I said, Congressman, can I ask you a question? She’s like, sure. What happened with the Pain Capable Bill...? Well, and there was a huge sigh … frankly, to be honest, we failed.” After further discussion, the congresswoman promised Grewe that before the end of that term, she would see the bill fixed and passed through the House, and she did.

Grewe explained that McMorris Rodgers was not speaking on why the Pain Capable Bill had failed. When Grewe asked why the bill failed, the congresswoman re-examined the bill and it passed three weeks later.

The event ended with an opportunity for the attendees to network. This is the first year that the conference was open to non-APP majors. According to executive chair of the APP major Tim Kocher, they hope to continue to have it be an open event in the future.

To view video clips from the event, check out the Herald Media Facebook page.

Contention at the Convention

Red, white, and blue balloons and confetti dropped from the ceiling of the Quicken Loans Stadium as Donald Trump and Mike Pence accepted the Republican Party nomination. Cleveland, Ohio hosted the 2016 Republican National Convention where Tim Kocher, a PHC junior, witnessed the events leading up to the nomination.

Four years prior to the 2016 convention, Kocher attended an educational symposium in Tampa, Florida, the place of the 2012 convention. The symposium focused on the process of hosting a convention and the events that take place over the course of it. While in Tampa, Kocher was impacted by the glimpses of what a National Convention was like and determined to go back someday.

Kocher interned with the Ohio Republican Party last summer, his first step towards interning at the then upcoming Republican National Convention. When he found that the convention would be located in his home state, Kocher was pleased with the opportunity of spending time with family and also being able to make significant connections with workers and attendees at the convention.

Over the course of his internship, Kocher was able to volunteer at the first Republican primary debate, where he made sure the event ran smoothly. He then became the deputy campaign manager for Randy Minchew and applied for the internship with the Republican National Committee (RNC). Kocher’s experience in Information Technologies (IT) set him apart from the other accepted interns and gave him opportunities to work behind the scenes for VIPS and attendees.

Kocher completed basic duties like keeping everyone’s software and computers running, setting up secure Wi-Fi lines, and making sure that all the technology for the convention, like the main screens and speakers, ran smoothly. As well as learning how the Internet was being sourced into the building, Kocher also learned to take proactive measures against hacking and other threats to cyber security.

The Quicken Loans Stadium boasts five multi-screen video walls, 562 television monitors, and a four-screen scoreboard. Before the convention began, Kocher helped set up the the cabling needed for the additional screens that were set around the stadium. The IT department was responsible for serving the staff, delegates’ media, special guests, and attendees, meaning that the staff had to provide service to others while maintaining their own software.

While he never directly interacted with any VIPS or delegates, Kocher did brush by the likes of Anderson Cooper, Joni Ernst, and Newt Gingrich. Before the convention began, Kocher had a cameo appearance in a story run by Fox Business. He also took an elevator with Ted Cruz the day Cruz made a speech that avoided endorsing Trump. “It’s so strange, because you’ll be in your office and then you’ll have to pop out somewhere, and in the course of doing your job, you can see someone famous on their way to an interview,” Kocher said.

Cruz’s speech and Melania Trump’s plagiarism were not the most important controversies at the convention. The main controversy regarded the delegates’ role call votes, where the chairman determines which side is louder and wins. A group of delegates wanted to unbind all delegates from their obligation to vote as their states voted but was unable to succeed at the rules committee level. The group submitted nine state petitions to change the format of the voting, but the RNC looked at who signed the petitions and persuaded the delegates to withdraw their signatures.

“The problem was the convention secretary and the RNC did not mention that the petitions did not go through; so many people who were expecting to have a direct vote were extremely upset,” Kocher said. After all miscommunications were cleared away, delegates retook the roll call vote. “I don’t think even the Cavalier games that are played in the stadium were as loud as the roll call that was taken,” Kocher said.

Interning for the RNC showed Kocher how people define the term “Republican” in a variety of ways, but can still be united under key principles. “The Republican Party has the ability to be diverse, which helps it adapt to changes,” Kocher said. “I don’t really buy into the idea that the Republican Party is going to go away anytime soon.”

Keith Zimmerman’s Internship at the FCC

The man on the phone refused to take no for an answer. He had finally figured it out: the police used invisible drones to torture him. Of course, the man could only see them at night, using a mirror to reflect moonlight onto the drones. But he was completely serious. The reason his health continued deteriorating was because of the radioactive waves being pushed into him by the invisible drones.
This customer was only one of the thousands of complaints PHC junior Keith Zimmerman handled during his summer internship at the Federal Communications Commission (FCC).

“I guess that most of what I worked on seems pretty boring, but being there and being able to work with people in a government agency was really cool,” said Zimmerman.

Zimmerman first connected with the FCC through Simeon Tomaszewski, a PHC alumnus who attends church with Michael Karowitz. When Karowitz, the FCC’s Deputy Bureau Chief of Consumer Affairs, mentioned that he was in need of interns, Tomaszewski suggested that he reach out to PHC.

“[Karowitz] came by and spoke, and I helped plan an event on campus,” said Zimmerman. “The first time I met him was showing him around PHC and then a few weeks later he decided to have people send in resumes. I was one of the ones he interviewed!”
While at the FCC, Zimmerman worked in the bureau that dealt with complaints about companies, such as Verizon or Frontier. Once Zimmerman learned his way around the computer system, he spent most of his time dealing with these complaints, either by routing them to the correct people, or by organizing thousands of backlogged complaints into an Excel spreadsheet to track data.

“These complaints made me kind of lose faith in humanity in both sides,” said Zimmerman. “On one hand, how could people be so obnoxious, but then how could the company have done such terrible things to people?”

Yet Zimmerman’s summer was not entirely comprised of complaining customers. He filled his spare time with big projects, like creating tutorial videos, teaching people how to properly use the complaints system. Zimmerman also went around and interviewed several divisions within the FCC, figured out what everyone did, and compiled a brochure on standard operating procedures.
In fact, Zimmerman’s biggest challenge was not in the office. Instead, it was the excruciating DC commute.

“I definitely wouldn’t do it again,” said Zimmerman, “but it was worth it because it was my first summer by myself. I was commuting from Purcellville to DC every day, and on good days it took almost two hours one way. I saw a bunch of other PHC students on the metro and we all went through same struggles.”

On the bright side, since the FCC has gotten smaller but remained in the same building, Zimmerman got to spread out for the whole summer.

“I got a huge cubicle – it was almost as big as my room!” said Zimmerman. “Since I had to share a room at my house, it was nice to come into work and stretch out a little.”

Ultimately, while one of the few undergraduate students in an office filled with law students, Zimmerman got to prove that he is a man of integrity with good work habits, and still maintains relationships with several of his coworkers.
“When it comes to actually being in workplace, it’s less about how intelligent you are and more about being a hard worker and using whatever knowledge you have well,” said Zimmerman. “That way it doesn’t matter if the other person has a doctorate; if they’re unable to finish the project and you’re able to finish it instead, then you’re more valuable to the company.”